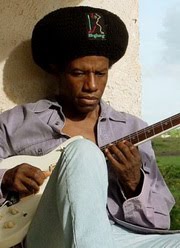 ddy Grant played at the Bournemouth International Centre on Tuesday, December 8th. He was a special guest on UB40’s “Labour Of Love” Tour, and from what I have later found out, by then I was the only person who was given the opportunity for an interview in the UK.

So, in short, this was my wild shot lead solely by my Slavic instincts…

It began in the main entrance area, in front of the first “set” of security. Pretending to know the manager who I only spoke to that day, I audaciously asked to be let in.

The first set of security didn’t buy it.

So I went outside and to the back, saw a door that said DO NOT ENTER… Upstairs, through this door, I asked the management where the rooms with the artists were, because “oh I am lost, silly me…” .

The second set of security directed me to the third, with the split of second away from the first ones seeing me where I am not supposed to be, were they didn’t allow me in.

The third security was simple – just stared at my cleavage as I drank a glass of beer, pretending to be expected by this

infamous manager… until I saw a really cool Rasta (later to find out he’s name is Kholofelo and he is Eddy’s sound mixer), asked him if he was with Eddy, he asked Eddy if he would give me the interview, then came back saying that “Eddy didn’t mind”, and from then I was rightfully waiting where by then I was a trespasser.

I watched the concert (as I was already in), then went backstage, got a 15min edgy interview, spoke to him for another 15, and happily lived ever after! …

A video of the interview will follow soon and I will share whatever I can remember about this inspiring, striking legend.